Changing the Economics of Banknotes

(Editor’s Note: The good people at Currency News are providing a follow-up story to our Original post on the changingÂ economics of banknotes and the cleaning of soiled money. The story of Spectra Corp. and Self Cleaning Currency first described a patented process whereby soiledÂ banknotes could be effectively cleaned and made reusable. This weeks article continues the story and answers the question we asked – is it cost effective? Is deployment of this technology justified within the bigger picture of the economics of Â banknotes. Read on and decide for yourselves. It seems some central banks are investing in this recycling technology.

Changing the Economics of Banknote Issue

The phrase â€˜disruptive technologyâ€™ has been much over-used lately, too often revealing wishful thinking by the organisation which wants to promote a new product or service. But Spectra Systems Corporation has revealed to Currency Newsâ„¢ its new process for cleaning banknotes, particularly paper banknotes in circulation, which it believes could extend the life of these notes substantially, thus potentially changing the economics of banknote issuance and production in a way that could be highly disruptive. Or, as company founder and President Dr. Nabil Lawandy, put it in an interview, â€˜this is a pretty big deal when you think about both the cost savings, the environmental mitigation and last but not least, the supplier dynamics of the banknote industry.â€™

Spectra, headquartered in Rhode Island, USA, but quoted on the London Stock Exchangeâ€™s AIM (Alternative Investment Market), has previously focused on equipment and materials for the authentication of banknotes. It has been considering ways to clean banknotes for some time, eventually settling on supercritical fluid carbon dioxide (SCCO2) as the best route to develop. It first carried out laboratory tests on single notes in a small pressure chamber, but then moved to a larger vessel in which it has conducted cleaning tests on standard 100 note straps and bundles of notes soiled in circulation, which are the most likely unit for cleaning required for circulating notes in the central and commercial bank environments.

Spectra will reveal details of the process at the Banknote 2014 conference but has allowed Currency News to publish this report of the main aspects of the process, which removes soiling contaminants from the notes without detriment to any of their physical and expensive security features.

The characteristics of SCC02 are key to this cleaning process. A supercritical fluid exhibits the properties of a liquid and a gas simultaneously, a state which is achieved by subjecting the base gas to temperature and pressure increases to what is called the critical point. For COÂ², this is at the relatively manageable temperature of 31.1Â°C and the high 73.8 bar (ie. almost 74 times atmospheric pressure), hence the need for a pressure chamber.

For the banknote cleaning, Spectra has found that a period between 30 and 180 minutes cycle time, depending on the specific banknote characteristics, is optimum . It has tested banknotes from several countries, including US dollars, pounds sterling, Chinese yuan, Indian rupees and others, and found that at least 25% of soiled notes can be put back in to circulation in an almost pristine state relative to soiling. But this is a conservative figure, and the actual figure achieved in a circulation environment, and with criteria for various central banks, could be significantly higher. 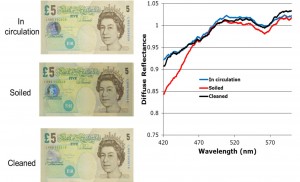 It then subjected these notes to its pressurised cleaning process, testing the effectiveness of the cleaning by comparing the measured reflectance spectrum of new, soiled and cleaned notes in both visible and UV light (see graph). It also weighed the oils removed from the notes and found that in some well circulated notes, as much as 4% of the initial weight of a strap of 100 notes was removed.Spectra did cleaning of notes with simulated soiling as well as notes soiled in circulation. In its lab tests, Spectra simulated the soiling of circulating notes by coating notes with artificial sebum (the secretion from human skin) and motor oil, two common contaminants, then oxidising them at 65% humidity and 65Â°C for eight days, a process that the De Nederlandsche Bank measurements show simulates the soiling of notes taken out of circulation (see page X).

Security features add a significant cost to the production of banknotes. The new US$100, for example, has nearly doubled in cost due to the addition of new security features. Spectraâ€™s cleaning process led to no measurable deterioration in the notesâ€™ characteristics nor in the performance of the security features, including ink contrast, public, level II and Level III features. Spectra tested for the visible light features â€“ intaglio, flexo, gravure and optically variable inks, holograms, KinegramsÂ® and threads, UV viewable features, machine readable capacitive and magnetic features, and covert central bank features such as De La Rueâ€™s ENIGMA (and hopes to test Giesecke & Devrientâ€™s M in the next few weeks).

In addition, the porosity of the notes was also left intact after SCCO2 cleaning. Banknote porosity increases with use, leading to notes becoming limp, compared to the â€˜snapâ€™ and stiffness of new notes. Gas transmission of notes â€“ a measure of porosity â€“ was measured before and after cleaning by firing a pulse of argon through the note, which showed that a worn note has a 20-fold increase in gas transmission compared to a new note, and that SCCO2 cleaning had no detrimental effect on porosity and limpness. Spectra is now working on a twist to the process which actually restores some of the mechanical integrity of the paper notes during cleaning, making the notes even more suitable to put back in to circulation

An additional benefit is that the SSCO2 cleaning also removed various bacteria from the note, an obvious benefit to the note-handling population. 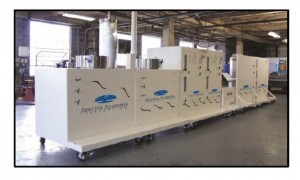 Dr Lawandy told Currency News that another 6-9 month development is needed to bring the method to commercial use, when the initial business model he envisages is for Spectra Systems to offer a bureau service to central banks or other cash handling organisations, although in time they may offer equipment to be installed on-site under leasing or licensing arrangements.Spectra is now carrying out trials with two central banks which are highly encouraging, and has now built a system to clean notes in circulation in batches of 100,000 or more, using a closed loop system in which COÂ² is fully recycled. An advantage of this approach is that the science and the technology is well understood and practised in other industries, so that what is used is standard equipment, albeit modified and assembled by Spectra to suit banknotes.

Meanwhile, Spectra has also filed several patent applications on this process and equipment for handling the soiled and cleaned notes in bundles.

Further details can be viewed or downloaded here.