Putting the Wow in Banknote Authentication 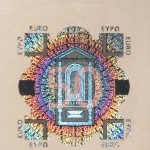 Example OVD (not from Lumenco)

As you know, Counting On Currency does not habitually present information fromÂ specific companies. The most significant reason to do so is the “wow factor” offered in the story. There is no shortage of that here. After all, another of Lumenco’s inventionsÂ involves glasses-free 3D technology for content conversion and in-room viewing. Apparently, these folks like to play with light.

With respect to banknote authentication, Lumenco’sÂ proposition is simple. Â Think of it as applying Apple iPad Retina display sharpness and quality to banknote OVD features. LumencoÂ offers a way to make the complexity and variety of OVD (Optical Variable Device) applications much more robust in detail and colour than is otherwise currently available. Therein lies the Wow Factor for the individual banknote user. Not only will the OVD features be easier to see and differentiate, but they will offer a higher level of confidence in authenticity.

We offer their recent press release below and encourage anyone interested to visit the Lumenco websiteÂ for a few more details on this promising new contender in the field of banknote authentication.

Â Lumencoâ„¢ Inc., a leader in micro-optics, today announced the upcoming launch of its new Lumenguardâ„¢ series of micro-lens technologies for the currency industry. Mark Raymond, CTO and co-founder of Lumencoâ„¢ stated: â€œOur revolutionary new breakthrough of a 20-micron thread and foil product is unlike anything ever seen in the currency industry.â€

â€œThe new Lumenguardâ„¢ series of micro-lens technologies are not magnifying moirÃ©s which are currently the standard in the marketâ€ Raymond clarifies. Lumencoâ„¢ created four new patented or patent pending technologies in the Lumenguardâ„¢ series that vastly differ from anything in the marketplace. Raymond points out that: â€œThe breakthrough in our technology is that it allows central banks to choose secure OVDâ€™s in full color offering a variety of secure overt effects at less than 25 microns with a big â€œwowâ€ factor. The technology is also unlike traditional magnifying moirÃ©s, as the imaging and mapping techniques used are nearly impossible to decode.â€

The new Lumenguardâ„¢ technology will allow sub 25-micron, revolutionary imaging and ultimately will be available in a two-sided version at 25 microns.