The Life Expectancy for Currency – Update for 2015

(Editor’s Note: We are pleased to present this insightful review of the life expectancy for currency, courtesy of Currency News and Editor Astrid Mitchell – currency is surely not on the wane and we at Counting On Currency agree with our friends and Partners at Currency News that this most trusted, patriotic and ubiquitous form of payment will be with us for decades to come – the life expectancy for currency is long and healthy!)

Where has the Feel Good Factor Gone?

In the January issue last year we ran a commentary on the likely trends, challenges and highlights for the new year of 2014, with the title â€˜The Feel-Good Factor Returnsâ€™.

The commentary included both our thoughts and those of senior representatives from the world from the world of currency, all of whom viewed the coming year (ie 2014) in a positive light.

One particularly interesting contribution was from Thomas Savare of Oberthur Fidicuaire, who asked whether the tide was still coming in or was it beginning to go out regarding currency?

He answered his own question, his view being that tide was on the turn, that central banks were more demanding, more precise in their technical requirements and more transparent in their procurement processes. This, in turn, was driving producers to improve their performance, to change their behaviour and to respond to new challenges. He predicted that â€˜only the clever, the flexible and the self-aware can succeed and growâ€™.

It proved to be prophetic in several ways. The tide definitely turned and the feel-good factor at the end of 2013 dissipated as it became apparent that, even though demand for banknotes remained high, prices did not.

Excess capacity saw producers cutting their margins to win business. The trend was, and will continue to be, exacerbated by central bank printing works looking to utilise their excess capacity in the commercial market, either by competing directly or by joining forces with a commercial supplier (eg Oberthur with the Bulgarian state printer, and Crane with the Bank of Moroccoâ€™s printworks). And it will be compounded as (or if) the new state printworks are set up, such as those planned for the proposed Gulf currency â€“ and most recently in Ethiopia.

The result of this market turmoil in 2014 was a reduction in profits for many of the banknote industryâ€™s companies, resulting in some cases in restructuring and/or the closure of printing lines. It is likely that 2015 will be a similarly tough year.

The bad fortunes of one sector can be counter-balanced by the good fortunes of others. One example is the coin industry which has lagged behind the banknote industry in terms of technology and security and which has taken a battering in recent years. There has been a marked improvement in the performance of several mints in 2014 (from, admittedly, a very low base the previous year) and the increasing adoption of advanced security technologies for coins â€“ hitherto a rarity â€“ augurs well for this sector in the next few years.

One of the points discussed many times during the year was the likely (detrimental) impact of the plethora of new payment systems. The year certainly saw a wide range of payment vehicles enter the market, but none has (yet) had a significant impact on a universal basis.

Indeed, it is debatable whether any alternatives will see universal adoption in the same way that cash and cards have. Numerous studies in different parts of the world to understand the trends and psychology of payments have shown significant differences from country to country. An understanding of such trends is essential in the fight to retain cash as the preferred choice of payment! We will gain more knowledge of these drivers and trends in 2015 â€“ what we need to see is more use made of the information.

While cash payments may be losing market share and declining as a percentage of payments, overall the use of cash continues to grow by around 5% a year on average, with much higher figures in developing markets such as China, India, Brazil, Indonesia, etc.

But the industry cannot afford to be complacent. For a start, the growth of banknote volumes in circulation masks the fact that, in some parts for the world production volumes are declining thanks to improvements in durability, printing technology, processing and handling.

Also, some of the many different and emerging alternative payment systems are far better suited to certain new forms of commerce, which will enable them to take root and in time displace cash.

We believe there are two fronts on which the currency industry should be fighting its corner.

First is lobbying and education. Currency News has long advocated some form of association or organisation to represent the interests of the currency Industry. No one else is going to fight currencyâ€™s corner, so we hope 2015 will be the wake-up year when the industry starts doing so.

Second is the cost of currency. It is competing with other forms of payment on many fronts, but cost is a very important one. There are many opportunities to reduce the cost of banknotes and coins from cradle to grave, not just in the physical notes and coins but â€“ critically – in circulation as well.

The Global Voice for Currency

There are major gains to be made from standardisation, but is there the will to work together and establish common standards in all aspects of the industry? Those products that have achieved the elevated status of â€˜disruptive technologiesâ€™ have had one factor in common, namely common standards. ATMâ€™s for example, have succeeded because they are interoperable and can be used universally, not just for customers of one bank or payment card provider. A similar mindset of standards and interoperability needs be applied to increase access and efficiency and reduce costs throughout the cash cycle.

This is a bright note on which to end our views, predictions and hopes for this year. There is a case for some ground-breaking changes in 2015 â€“ we hope the industry will take the initiative.

Keeping Our Eye on the â€˜Big Pictureâ€™

Despite variations in market dynamics along the banknote supply chain since 2012, banknote design activity has experienced constant growth and the trend will continue. Since design acts as the gateway for technology and substrate suppliers, many industry players, along with central banks, have targeted design as the key to both introducing new technology and getting the best value for money.

advantages of cash as a payments tool are communicated and understood.

New technology must be tested, re-tested and fully validated before introduction to new banknote series. Decision-makers should be fully aware of the upsides and limitations of such technologies.

The banknote landscape is shrinking and in parallel, the quantity of technologies available to fill this landscape is increasing at a phenomenal rate. The race for innovation must be tempered by practical application and user needs. The process of evolution must be managed over the coming year in a collectively responsible and sustainable fashion.

The IBDA is working hard with leading technology developers (IBDA partners) along with central banks and the designer community to ensure such sustainable evolution and retain the current levels of excellence that are the hallmark of our industry.

Currency in the Payments Mix

Despite impressive growth in the adoption of alternative payment technologies, their share in the total value of global payments remains relatively insignificant. In developing countries in 2015 we expect a continuing uptake of mobile payments, providing essential access to the modern economy for previously unbanked consumers.

In industrialised countries with a developed paymentsâ€™ infrastructure, the rise of card payments (and other account-linked methods) will go on, continuing gradually to substitute the share of cash in the paymentsâ€™ mix.

The key drivers for this growth are developing e-commerce and easy access to relatively mature and reliable payment portals facilitating online transactions, implicitly excluding cash due to its physical nature. Although the relative share of cash is threatened by new payment technologies, the absolute value and volume of cash payments will not necessarily decline and may even increase as the economic recovery progresses.

On balance, in the coming year we expect cash to be at least as popular a method of payment as it was in 2014, as long as prevailing interest rates remain low.

Even though the digitalisation of money is still on the rise, banknotes remain resilient and are growing by c. 4-5% per annum. As the global market leader in banknotes – covering the complete value chain along the cash cycle – G&D is in a unique position both to identify critical market developments and to drive innovation.

Right now, we see that integrating existing and new banknote security features is increasingly becoming a challenge for all players involved. Balancing cost, complexity, and quality in designing, producing and handling currency in circulation requires both broad and in-depth competencies.

As a technology leader we also see the industry is at a turning point. Mainly because of lack of standardisation and imbalanced market conditions, the industry is losing speed and power when it comes to innovation. In light of the ongoing rise of mobile payments, the entire industry is at risk of falling behind and becoming irrelevant.

Security Key to Success of Coins 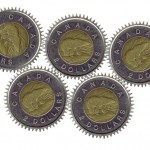 Lately, weâ€™re seeing several headlines warning of the increasing counterfeiting threat to high-value coins from major currencies. Thatâ€™s a development of particular interest to the Royal Canadian Mint, as enhanced security has been integral to our coinage products since the introduction of our multi-ply plated steel technology, and we believe anti-counterfeiting innovations will continue to trend with international coin customers in 2015.

Winning IACAâ€™s (International Association of Currency Affairs) Best New Coin Innovation in 2013 for the security features on our new $1 and $2 circulation coins was a compelling acknowledgement that the Mint already has the most secure coins in the world. Security will surely grow as a determining factor for customers looking for who can best deliver value in terms of price, quality and integrity.