The presentation by the International Association of Currency Affairs (IACA) of the 2013 Excellence in Currency Awards took place, appropriately, in the spectacular surroundings of the OAKA Velodrome, which played host to the cycling events at the 2004 Olympic Games. 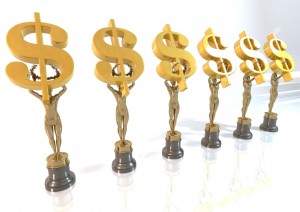 Finalists in theÂ Best New BanknoteÂ category included the Bank of England Â£50 note, Macao’s commemorative 100 Pataca note, the States of Jersey Treasury Â£100 note, the South African Mandela series and the new Canadian polymer series. The award was won by the Bank of Canada, which has recently unveiled the designs for the $5 and $10, the introduction of which this (past – Editor) November will complete the dynamic and innovative new series.

TheÂ Best New Currency FeatureÂ award went to SICPA for NEOMAGÂ®, its new range of soft magnetic pigments inks in light colours. NEOMAG pigments, which can be incorporated into intaglio inks, are IR transparent, and can therefore be combined with the company’s SICPATALK IR feature to provide ultimate machine readability in one area of the banknote.

The other finalists in this category were Oberthur Fiduciaire with Dualtrack (a banknote thread comprising two non-adjacent tracks with different, interconnecting, optically variable effects, as well as magnetism and conductivity for machine readability) and Arjowiggins Security with Picture threadâ„¢ (also a thread, with 3D effects that enable images such as portraits to be incorporated).

There were two finalists for theÂ Best New Currency Innovation. One was De Nederlandsche Bank and the National Bank of Belgium for CashSPP, the logistical cash management IT system that is now shared by nine central banks within the eurozone. The other, and the winner, was the DNB for its fitness sorting software BRAINÂ², a new concept for fitness sorting based on self-learning neural networks, which it describes as a quantum leap in translating human judgement into machine decisions.

Moving on toÂ Best New Currency Product, the winner of this award was KBA NotaSys for the Super Orlof Intaglio III, its new five colour intaglio press with new functionalities throughout, and with noticeably improved productivity and user-friendliness, along with automatic exchange of wiping cylinders and washing devices for each cylinder that dramatically improve up-time.

The other finalists in this category included DNB with BRAINÂ² and to APIS and Intercrim Press for the Banknotes of the World app.

TheÂ Best Public Education ProgramÂ award was made to the Bank of Namibia for the ‘Know Your Currency’ campaign that it ran in conjunction with the launch of its new series last year. The campaign included the development of a special kit to demonstrate how to authenticate the new notes by checking the features, including a poster, brochure, pocket guide and DVD.

The other finalist include DNB with its Eurobiljet ‘Check a Banknote’ smartphone app – believed to be the first app launched by a central bank as a public education tool, and the Bank of Mexico for its involvement in Kidzania â€“ the City of Children â€“ in Mexico City, where children can role play in a miniature version of the Bank’s cash centre and printworks.

TheÂ Best Currency Website, meanwhile, went to the Reserve Bank of Australia for its dedicated website (http://banknotes.rba.gov.au/ausbanknotes.html), which engages the public with a clean and modern look and includes videos about security features and banknote production as well as three separate games targeted at different age groups.

The other finalists were the Bank of Mexico (www.banxico.org.mx/billetes-y-monedas/indexEn.html) and the Bank of Namibia (www.bon.com.na/Sand-Dune-Namibia-Website/Namibia/default.html) .

Finally, theÂ Lifetime Achievement AwardÂ went to Dr Bruce Hardwick, who has worked in R&D since gaining his PhD in 1974 and joined Note Printing Australia (NPA) in 1983, leading the team responsible for taking the polymer note into production. He was a working party member of the Intaglio Research Group (IRG) for nine years. This became the Intaglio Study Group (with six member countries) in 1995 and he became Acting Chairman in 1998. He was also a member of the Four Nations’ Advanced Counterfeit Deterrence Group Working Party for almost 15 years and chaired the group for four years. Bruce has developed and patented a number of banknote security features and presented technical papers at international conferences.

The Lifetime Achievement Award winner is voted by the members of the IACA Board, while the winners of the other Excellence in Currency Awards were chosen by IACA members. They were presented at the end of the Currency Conference gala dinner by IACA Vice President Brian Lang, Executive Director Genie Foster, and Co-Chairmen Tom Ferguson and Rick Haycock.