The Coin Banknote Boundary Is Not the Real Issue

editor’s note : many thanks to Astrid Mitchell for providing this particularly timely piece regarding the coin versus banknote debate and that the coin banknote boundary is not the real issue. This debate was echoed by central bankers we encountered at every industry event we attended in 2013…

Whilst the decision to issue a coin or a banknote at the extremes of theÂ denominational spectrum â€“ coins at the low value end, and notes at the high end â€“ is straightforward, the case for the middle denominations has never been more competitive.

So it was that a panel discussion took place at the recent Coin Conference in Berlin on this topic, moderated by Jonathan Ward of SMI, who set the scene by outlining the key issues in this debate â€“ namely the appropriate level of security for such denominations, the function that the denomination(s) perform, public acceptance Â (and whether or not e-payments could carry out such functions), which format â€“ note or coin â€“ offers better value for money, and whether there is an appropriate infrastructure to support widespread coining of low denominations. 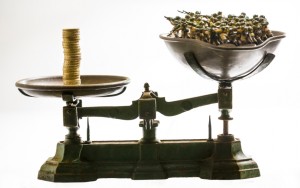 His introduction was preceded by a presentation from Shaun Ferrari of the United States Federal Reserve, who successfully demolished the assumption that, long term, coins are cheaper than banknotes â€“ in the US at least. His presentation gave a preview of the findings of a study, to be published shortly, which was undertaken in response to claims by the US Government Accountability Office (GAO) that replacing the US $1 bill with a coin could save up to $4.5 billion over 30 years.

The GAO has produced various reports over the years, which â€“ as Shaun pointed out â€“ have successively and consistently downgraded the projected savings. Its latest figures are based on a number of assumptions relating to replacement ratios and the life of the $1 bill, among others, and also factor in the value of seigniorage, but not the wider costs to society.

According to the Federal Reserve, the issue of seigniorage in relation to low value coin is spurious â€“ it is a form of tax and should not be taken into account. Removing the benefits of seigniorage makes the savings of coin over banknote marginal – at best. Adjusting even slightly some of the assumptions â€“ note life, replacement ratio of notes with coins, currency growth rate and costs (for which the Federal Reserve did several sensitivity analyses) – makes the cost/benefit neutral at best. The factoring in of societal costs further results in considerable losses, even on GAOâ€™s assumptions.

Following the departure of Shaun (his presentation was made by videolink from the US), Simon Lake of the UKâ€™s Royal Mint, and Michael Boehm of the paper manufacturer Papierfabrik Louisenthal, gave presentations for and against coins and banknotes respectively. And very entertaining they were too.

Speaking for coins, The Royal Mint acknowledged that they often suffer public unpopularity, but gave a six-point description in their defence â€“ including durability, security, administrative costs, cash management availability, health and what Simon Lake termed â€˜trueâ€™ seignorage. This refers to the fact that, as coins do not tend to return from circulation, the seignorage is more or less permanent (and predictable). Banknotes, by contract, return frequently to the issuing authority, and the seignorage is therefore transient and short-term.

These arguments were firmly, but good-naturedly. quashed by Michael Boehm. Comparing his presence at the conference as akin to a meat-eater attending a convention of vegetarians, he referred to the enduring popularity of banknotes (a straw poll of the audience found that, whilst most had coins in their pockets, all had banknotes), durability (particularly with hybrid and long-life substrates), as well as environmental benefits and security. He concluded, however, that the debate was missing the point – in that coins and banknotes both face similar threats from cashless payments, such as mobile, and that this is where industry attention should be focused.

The discussion was then opened up to the audience, and if the organisers were hoping that a verbal fist-fight would follow between the competing banknote and coin interests, they were disappointed. As Jonathan Ward bemoaned, what ensued instead was a â€˜love-inâ€™ with all parties agreeing â€“ in line with Michael Boehmâ€™s comments – that the real issue was not the coin/note boundary, but the challenges faced to the industry as a whole by alternative â€“ and in particular digital â€“ forms of payment.

This consensus was, in itself, surprising. For too long the industry, in its broadest sense, has looked inwards, focusing on â€˜micro-competitionâ€™ (eg. paper versus polymer, coins versus notes). Â The panel discussion in Berlin gives hope that the industry is looking outwards as well â€“ and that competitive differences can be put aside to focus on where the real threats to both coins and notes lie.