Cash is More Expensive than Cards

I just returned from the ICCOS Americas Event in Miami. One presentation caught my attention (we will offer an event summary in the next few weeks) amongst many compelling, interesting and educational ones. Ms. Eugenie Foster, Executive Director of IACA delivered the results of her research into the practices of Central Banks who either allow payments offerings to find their own place within a given country and those Central Banks who take a more active role to influence the success or decline of various payments options. It was very interesting to note that amongst countries whose Central Banks take an active influencing role many, if not all, use some potentially skewed data to support their arguments in favour of influencing less use of cash.

Cash is More Expensive than Cards in Sweden

Sweden is widely regarded as being in the vanguard of the movement to a cashless society. Cards predominate, and the population is encouraged to use these and other forms of electronic transaction on the premise that cash is expensive and card transactions are cheaper. Putting this premise â€“ which is more opinion- than fact-based – to the test, Swedenâ€™s two leading CIT companies â€“ Loomis and Nokas – funded an independent study to obtain a more detailed understanding of the costs associated with handling payments for stores and restaurants. Occam Associates was charged with the research project and presented the results at the recent ESTA conference in Marseille.

The Scene in Sweden

Cash is definitely in decline; the amount in circulation decreased by 14% between 2007 and 2012. An analysis of ATM withdrawals between 2004 and 2011 showed the value decreased by 30% (although the number of withdrawals did not to the same extent, as people were on average withdrawing less per transaction). A total of â‚¬25 billion was withdrawn from ATMs in 2011.

In comparison, the use of cards has increased rapidly. In 2011 the number of card transactions at POS terminals was seven times higher than the number of ATM withdrawals, and the value trans- acted was â‚¬71 billion. Cards are increas- ingly being used for small amounts, basi- cally acting as a substitute for cash.

Only one of the four major banks now offers a cash service at all of its branches. The others have reduced cash handling dramatically (30% of bank branches are now cash free). They are also reducing the number of ATMs they operate, although the void has been filled by inde- pendent operators (to the extent that the number of ATMs has increased by 25% in the last six years).

Analysis of the data 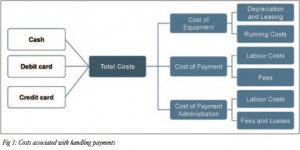 The objective of the study was to answer the question â€˜What are the costs associated with cash and card paymentsâ€™. To ensure it was both meaningful and statistically sound, 50 companies (40 stores and 10 restaurants) participated, with a cross section of different types and size of business with full geographical coverage of the country. A questionnaire was sent out to all participants, and they were then interviewed â€“ either face to face or by telephone for 1-2 hours â€“ resulting in the collection of more than 80 data points per participant. 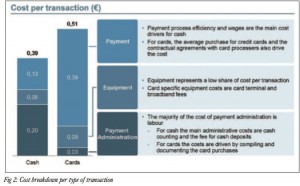 All payment related costs were analysed â€“ the labour costs and fees of receiving payments, the cost of adminis- trative work such as counting the cash etc and equipments costs such as card terminals, cash registers etc (see Fig 1). And the data was analysed from different viewpoints. For example, debit and cred- it cards could be viewed as two separate payment methods or as one, and the type of comparison made could be relative (comparing values) or absolute (based on total cost).

Another way of looking at the cost per transaction is to take account of the value transacted – cards tend to be used for higher value and cash for smaller value payments. In this analysis cards per- formed best â€“ the average cost as a percentage of the transaction value was 1.7% for cards and 2.8% for cash.

Yet another way of analysing the data was to evaluate in absolute numbers the cost of handling cash and cards as a percentage of all payment costs. In this analysis, cards were the largest cost driver for 92% of the companies.

To provide greater detail, an in-depth evaluation of the costs by type of store was made â€“ five company clusters select- ed for this analysis were small stores, medium sized stores, grocery stores, restaurants and fast food restaurants. 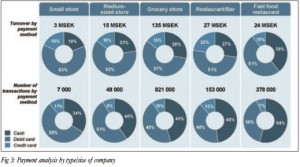 All of these cluster results were based on the actual recorded data but, accord- ing to OCCAM, it is possible to use the cluster data to predict outcomes in different circumstances, for example if card share of the transactions increased or decreased as a percentage of transactions. In this analysis, if card transactions increased as a percentage of the total, four out of the five clusters would experience higher costs – the small stores costs would remain the same.

It is worth noting that this study does not assess the total societal cost of cash and other payment systems as it excludes the cost to central banks, commercial banks, CITs and the public of the various payment instruments.

Cash in this study, however, was shown to be the cheapest payment method in two out of the three metrics. It was cheaper per transaction for 74% of the companies and cheaper in absolute numbers â€“ in 92% of companies, cash generates less than half of the total costs for handling payments. However, the average cost of handling cards as a percentage of sales was lower, 1.7% compared with 2.8%.