The National Value of Currency

the other REAL value of currency

(editors comment:) As we have noted in previous posts,Â a Nations character, heritage and visions are each a strong and resonant statement for one aspect of thatÂ Nation’s “value of currency”. In the important arena of sovereignty and cultural independence, many advocates of nationhood and separation from parent countries maintain that once independence is granted they should be free to continue the use of the parents national currency. Having lived my entire life with the debate and periodic threat of the separation of one province fromÂ Canada myÂ “home and native land”, I have come to have strong opinions regarding the use of currency and other national icons by those who would choose to leave. That said, this is not a political stump, but a post on the many faces of the Value of Currency. We thank our friends at Currency News for supplying this provocative feature article from the September 2014 issue.

Currency and the Public

Attaching too Much Significance to Notes and Coins

In the currency industry, we make much of the fact that banknotes (and coins) are more than just pieces of paper and metal. They are the physical representation of a countryâ€™s currency, and symbolic of its sovereignty and pride. However, with a referendum on independence fast approaching in Scotland, which is being closely watched by other countries with their own secessionist movements such as Canada and Spain, this interpretation may have gone too far.

Among the increasingly fractious arguments between nationalists for Scotlandâ€™s independence from the rest of the UK (now being referred to as rUK) on the one hand, and unionists for the status quo on the other, the one issue that has provoked more controversy than any other is that of the currency of an independent Scotland, and which banknotes it will use.

And it is demonstrating very clearly a level of ignorance in certain quarters as to what a currency actually is. In its narrowest sense, it is a system of money in general use in a particular country, but even then, the paper and coins which represent it are just one medium out of many for making transactions. In its broader sense, it represents the assets and resources of a county and the foundations for its monetary and fiscal policy. 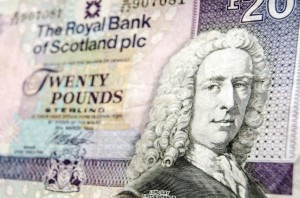 The Scottish National Party (SNP) â€“ the party in charge of devolved government in Scotland and protagonists for full independence – have stated that, if it wins the referendum, Scotland will enter into a currency union with rUK and carrying on using existing notes and coins. This has been flatly dismissed not only by the current UK government, but all three major UK parties. Plan B, says the SNP, is that Scotland will simply continue using the pound anyway, and because it couldnâ€™t get a currency union, wonâ€™t pay Scotlandâ€™s share of the national debt.

This may be going down well in electioneering terms, but the effects are far-reaching and dangerous. And, it would appear, little understood

Countries do, of course, use the currencies of other countries, officially or otherwise â€“ in so-called dollarisation, or eurorisation (to which may be added sterlingisation). And in doing so, they use the banknotes of that currency (although not necessarily the coins).

But this is generally because they are too small to sustain their own currency, or because their economies are too fragile. In the latter case, using another countryâ€™s currency gives them stability when their own efforts at economic management have failed. But in both cases, countries without their own currency are at the mercy of the monetary and fiscal policy of the countries whose currency they have adopted, and they cannot tailor these policies to their own economic or social circumstances, for example by increasing the money supply or adjusting interest rates (Ecuador being a case in point â€“ see page 16). In other words, by adopting the currency of another country, they are outsourcing monetary policy.

Moreover, countries without their own central banks and monetary policy cannot sustain domestic banking and financial sectors, as there is no â€˜lender of last resortâ€™ – a role that is currently, in the UK, filled by the Bank of England.

Without a lender of last resort, banks would have to build up their own reserves (or, as could happen in Scotland, run the risk of capital flight and such banks redomiciling elsewhere). And a government of a country whose first step was to default on its debts would be regarded as a pariah, raising the costs of borrowing on the international market. .

All in all, not the best start for a newly-independent country,

In the public imagination, banknotes and coins are not only interchangeable with currency in its broader sense, but have an emotional attachment and significance far in excess of that currency. In practical terms, however, this significance is far, far less.